Paul Derham was born into a Mudeford fishing family and thought his destiny was to go fishing like his Father and Grandfather. However he was not allowed to do this. Instead Paul was to find a trade or profession. Paul decided to join P&O as a Navigation Cadet. After serving on all types of ships, Paul qualified and was sent to SS Canberra as a Third Officer and over the next 24 years rose up to Staff Captain sailing on Canberra, the old Oriana, Island Princess, Royal Princess, Pacific Princess, Sky Princess, Victoria, Arcadia, Aurora and the new Oriana.

Paul completed an auditors course and audited various ships of the P&O and Princess Cruises fleet and the QE2, which was by that time, part of Carnival.
In 2003 an opportunity arose to purchase the Mudeford Ferry. It was a hard decision to make as Paul was about to be given command of his own ship, however, Paul decided that he had been from Melbourne to Mumbai and now it was time to return to Mudeford.
Paul enjoys operating his own fleet of five vessels although as he says “..it’s not without its Trials and Tribulations”
The Mudeford Ferry was featured in the BBC programme ‘Invasion of the Job Snatchers’ and Paul came up with the catch phrase for his crew of, “unless you are 5 minutes early for shift, you are late”.

Hi. My name is Ted Bishop and I am one of the skippers of the Mudeford ferry. I have been at sea for most of my working life. For 38 years I was a commercial fishing skipper working an area which extends from Portland Bill to Beachy Head, sometimes in the kind of weather that would not be described as inviting. Five years ago I joined the ferry team with the intention of continuing my working career until I was no longer useful. 3 years ago I took on a new challenge by deciding to deliver a few motor yachts during the slack periods of the ferry service. This has now grown into an extremely busy job and in the past two years I have traveled in excess of 30,000 miles delivering over 140 very expensive new motor yachts to places as far away as Bergen in Norway, Kotka in Finland and Barcelona in the Med. 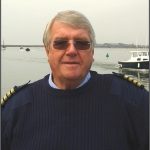 Chris is “The Saturday Skipper” who has been regularly at the helm of the Josephines and Ferry Dame each year since 1994. Born in Tuckton he started driving the passenger boats up and down the River Stour as a teenager before going “deep sea” driving the boats from Bournemouth Pier to Yarmouth, Swanage and Poole. After a career in Corporate Banking Chris returned to the area, and part time employment as skipper on both the Mudeford and Christchurch ferries. In 2017 Chris teamed with Stephen Bath to produce the RIVER BOOK which chronicles the history of the Ferries and other features of Christchurch Harbour. 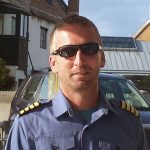 Guy has been working on commercial boats since the age of 12 when he worked as deck hand on local fishing boats and passenger vessels.

During his career Guy has worked on a variety of different vessels, from tugs and work boats, to sailing charters and super yachts, and as far afield as the Indian Ocean.

Born into a seafaring family, Guy lived on ‘Avontuur’, a converted Dutch canal barge, for the first six months of his life and since then, has always had a strong connection with the sea.

In 1988 Guy started working on Mudeford Ferry’s ‘Ferry Lady’ as deck hand at weekends and during school holidays. Then in May 2000, became full time skipper of ‘Ferry Dame’ and ‘Josephine’ before moving on to new horizons in 2002.

Before returning to the Mudeford Ferry team, Guy lived on Brownsea Island with his wife and children, where he was a National Trust Ranger/Boatman.